Today is Father's Day so I have been thinking about the fathers in children's literature I admire.  There are many #bookdad favorites including:  Auggie's dad (Wonder), Trixie's dad (Knuffle Bunny Free), the dads in Every Friday and When Daddy Calls Me Man. 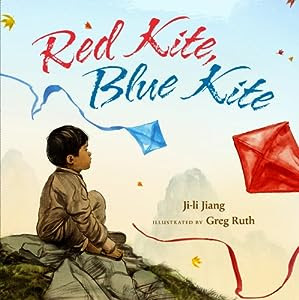 Soon Baba appears to tell Tai Shan he will not be able to fly his kite for a long time.  Baba tells Tai Shan, "When you fly our kites, know that I am looking at the same sky and thinking of you."  Then Baba is taken away.  Will Baba and Tai Shan ever be together again?

This is a beautiful story of hope and a reminder of the freedom's we often take for granted. 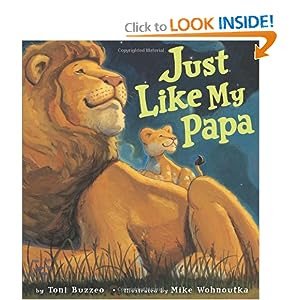 Just Like Papa by Toni Buzzeo and illustrated by Mike Wohnoutka.
Many kids want to be just like their dads, and Kito is no exception.  When Papa roars Kito roars.  When Papa hunts Kito hunts.  No matter how hard Kito tries he just doesn't have the power of his father.  Some day he will.

I enjoyed the language in this story.  Phrases like "echoes across the plain," "yellow moon slides into sleep," and "sun slips toward blue twilight" fill the pages.  The characters are sweet and endearing.

The illustrations by Mike Wohnoutka are colorful and interesting as the reader is moved from morning to night, from rest to hunting, and from serious to fun.
Posted by Cathy at 9:23 PM

Cathy
Teacher Leader. Literacy Coach. Learner. Reader. Writer. Education is not just my work, it's my passion. During my journey I've been fortunate to work as a Reading Recovery Teacher, Literacy Coach, and classroom teacher in grades K-6. I believe in public education and the power of children to shape, not just our future, but our todays. Working to grow my thinking about literacy, digital possibilities, and building connected communities.

Merely Day by Day (my other blog)

Make Your Bed: Little Things That Can Change Your Life...And Maybe the World
by William H. McRaven
tagged: currently-reading